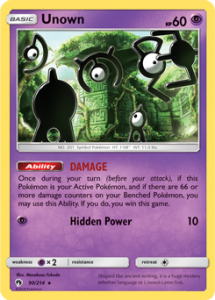 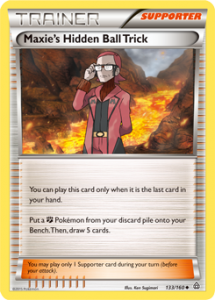 Pokemon has released their quarterly update to the ban list and two cards were added. Players were expected Lusamine to be on this list, due to the possibility for infinite recursions, but it is not to be for now, at least.

No cards are banned in Standard format, but Maxie’s Hidden Ball Trick and the “DAMAGE” Unown (LOT 90/214) were added to the ban list for Expanded.

Pokemon explains their banning as follows:

A Fighting-type Pokémon in the upcoming Sun & Moon—Team Up expansion would create a potentially devastating combo with Maxie’s Hidden Ball Trick that can be achieved on the first turn of the game. Rather than wait and see how this turns out, it was determined that the best course of action was to prevent this combo before it happened.

With multiple combos that exist in the Expanded format, the DAMAGE Ability of Unown could be used to win the game on the first or second turn. Even though these combos haven’t yet proven to be successful in tournament play, they will become easier to achieve with the release of new cards, so Unown is being banned as a preventive measure. Note that Unown with the HAND Ability and Unown with the MISSING Ability, also from Sun & Moon—Lost Thunder, are still legal for tournament play.

Here is the complete list of banned cards in Expanded:

The announcement is found here: https://www.pokemon.com/us/sun-moon-team-up-banned-list-and-rule-changes-quarterly-announcement/