First the Pokémon TCG introduced Tag Team Pokémon and they took the game by storm with their super high HP and super strong attacks. Now the Pokémon TCG has extended the concept to Supporter cards with the introduction of Tag Team Supporters in Cosmic Eclipse. These Supporters have one normally strong Supporter-type effect, and as a bonus, you can activate a second strong effect for a cost. In addition to being powerful, they are also searchable! The new Item card “Tag Call” allows up  get up to two “Tag Team” cards. These can be either Tag Team Pokémon-GX, or Tag Team Supporters, or one of each! A very powerful combo!

Because this is a new mechanic, there have been a lot of questions about exactly how these cards work.
Can you use only one effect or the other?
Are there any restriction or exceptions to that?
What the heck are Bellelba and Brycen-Man wearing, anyway?
Important questions like that.
Let’s see if we can clear some of them up.

First, before addressing individual cards, let’s look at the beginning phrase of the secondary effect of these cards: “When you play this card, you may discard…” and then it states a cost. These are costs and not effects of their own. If you can’t do the secondary effect described after this cost, you can’t just pay the cost for no reason.
OK, let’s take a look at the individual cards… 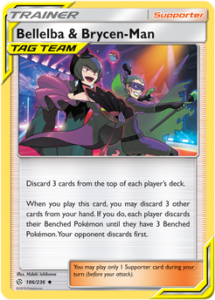 However, if neither player has any cards left in their deck, you can still play the card and do just the second effect as long as at least one of the players has more than 3 Benched Pokemon. This, of course, begs the question: “If your opponent has no cards left in their deck, why don’t you just end your turn and win the game?” So, more than likely you’ll be performing the main effect all of the time even if you don’t want to. 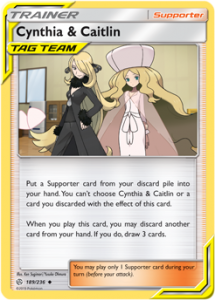 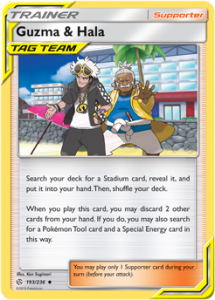 Guzma & Hala
Since the first part of this Supporter is to search for a specific type of card (a Stadium), you can fail that part since your deck is private knowledge.
Similarly, if you want to, you can also discard 2 cards for the second effect and fail that search as well, for the same reason. And of course, if you genuinely can’t find any one of the types of cards you are searching for, you can still get one or two of the other types using the “do as much as you can” principle. Note that you have to have a deck to search, of course, or else you can’t even play the card. And you have to at least shuffle your deck even if you intend to fail all of the searches. 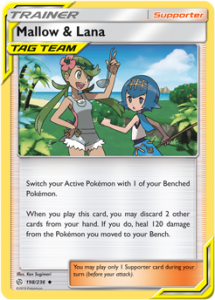 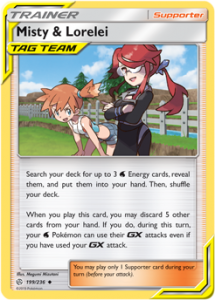 Misty & Lorelei
Since the first effect is a search of the deck for a specific type of card, you can fail part or all of it if you wish. You still have to do the search, if you have a deck to search since it does not say may, but as noted above, your deck is private knowledge and you can fail any search of it for a specific type of card. You have to at least shuffle your deck.

It is very important to do the discard for the secondary effect, if you are going to use it, before you search for those energy cards, since you cannot use them as part of your discard cost of 5 cards. If you have not used your GX attack, you can’t use the secondary effect and therefore can’t discard the 5 cards since it is a cost.

Finally, note that if your opponent’s Latios GX’s “Clear Vision GX” attack has been used, Misty & Lorelei will not allow you to bypass that effect. 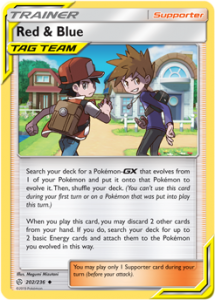 This is another card, like Mallow & Lana, where the secondary effect is done to a card that was affected by the primary effect. However, since the timing of the discard is “when you play this card”, you can discard 2 cards, and then if you don’t get a Pokémon-GX from your deck to evolve one of your Pokémon, then you can/ would have to fail the secondary effect.

Also note that if you don’t have a Pokémon in play that can evolve into a Pokémon-GX (even if that card is not legal in the format being played) you can’t play the card at all. This is similar to rulings are cards such as Wally and Evosoda.

Well, there you have it! I hope that clears up some questions that you have.
If there are any other things that you need cleared up on these cards, please comment in the forum topic for this article, or post in the Ask the Rules Team forum.