The FAQs for SM: Team Up have been released. They are available on the Pokemon Professor forum, but for those of you that don’t have access, we are posting them here as well. I have attached the pdf version to this article, but they are also posted below.
Enjoy and play safe!

Q. If I only have one {L} Energy in my discard pile, can I use Tapu Koko {*}’s “Dance of the Ancients” Ability to put it on one of my Benched Pokémon?
A. Yes, you would do as much as you can.

Q. Does the extra Retreat cost placed by Absol’s “Dark Ambition” Ability increase the damage done by Absol’s “Shadow Seeker” attack?
A. Yes it does.

Q. Can I use Ninetales’ “Nine Temptations” Ability if my opponent has no benched Pokémon?
A. Yes, you can discard 2 {R} Energy cards from your hand, and that’s it.

Q. If I use Charizard’s “Roaring Resolve” Ability with only 10hp left, does he get KO’d when I place the 2 damage counters before or after I search & attach 2 {R} Energy cards?
A. You must finish all the text of the Ability before checking for knockouts, so yes you would search your deck and attach {R} Energy cards before KO’ing Charizard.

Q. When I use Mimikyu’s “Copycat” attack, do I need to have the same required energy as the opponent’s previous attack?
A. No, you only need whatever energy is required on Mimikyu in order to use its Copycat attack. However, if the attack requires you to do something with a particular type of energy you don’t have, you cannot use that part of the copied attack.

Q. When using Hoopa GX’s “Devilish Hands GX” attack, can I keep choosing a Pokémon that would already be Knocked Out by previous choices, or do I have to choose a different Pokémon once I have done enough damage to KO the first one?
A. You make all 6 choices before doing any damage; so if you wish, you can do more damage than you need to a Pokémon in order to knock it out.

Q. If my opponent has no benched Pokémon, do I do 50 damage to their active Pokémon when I use Nidoking’s “Drag Off” attack?
A. No. Damage is only done to the “new Active Pokémon”. If there is no switch, then no damage is done.

Q. Does the extra Retreat cost placed by Absol’s “Dark Ambition” Ability increase the damage done by Absol’s “Shadow Seeker” attack?
A. Yes it does.

Q. If my opponent Knocks Out my Active Pokémon and I promote my Zapdos to be Active after the attack, do I get the bonus 70 damage for “Thunderous Assault”?
A. No. In this scenario, you promoted the Zapdos while it was still your opponent’s turn. In order to get Thunderous Assault’s additional damage, it would have to become Active during YOUR turn.

Q. If I use Judge Whistle and choose to put a “Judge” card from my discard pile into my hand, can I put a “Judge Whistle” into my hand?
A. No, that choice only allows you to put a card named “Judge” into your hand; it does not allow you to get a card “with Judge in its name”.

Q. Can I choose to play Unidentified Fossil as one of my starting Pokémon?
A. No, you cannot. It’s considered a Trainer while in your hand, so it doesn’t count as a Basic Pokémon during setup. (Feb 8, 2018 TPCi Rules Team)

Q. If an opponent KO’s my Unidentified Fossil do they get to take a prize?
A. Yes, that’s part of being treated as if it were a “Basic Pokémon”. Your opponent takes a prize when Unidentified Fossil is knocked out, but not if you discard it from play. (Feb 8, 2018 TPCi Rules Team)

These are your registration links and stats showing TCG filling up fast:

Spectators must register, too!

The PokéGym Expanded Format Legal Card List has been updated for the  Play! Pokémon 2017-2018 Season. Check it out and give this link to your colleagues and players!

Echoing the story line from the recently released video games Pokémon Ultra Sun and Pokémon Ultra Moon, this latest Pokémon TCG expansion is set in an alternate version of Sinnoh, one of the twisted parallel regions that players can reach by traveling through an Ultra Wormhole. END_OF_DOCUMENT_TOKEN_TO_BE_REPLACED 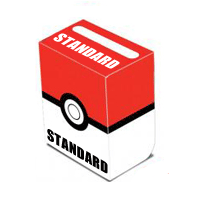 The PokéGym Standard Format Legal Card List has been updated for the  Play! Pokémon 2017-2018 Season. Check it out and give this link to your colleagues and players!